Propagation of quasi-neutral beam into plasma

Ultra-relativistic outflows are of interest not only for astrophysics but also to understand the interaction of relativistic beams with plasmas. The interaction of particle beams (e− and e+) with plasmas has been studied in the context of plasma wakefield accelerators magnetic field generation via current filamentation instability in GRBs scenarios, particle acceleration in collisionless shocks and inertial confinement fusion.

It is known that the interaction of relativistic particle beams with plasmas drives several instabilities such as the current filamentation, two stream and oblique instability. In particular, the first one, known also as electromagnetic instability, is able to drive strong transverse magnetic fields that break up the beam into narrow and high current density filaments and lead to the emission of synchrotron radiation.

Experimentally probing such complex phenomenon is still an open challenge and especially the creation of the astrophysical conditions in laboratory is difficult. However, present laboratory facilities, such as the Stanford Linear Accelerator, may offer a possible solution to this problem. Current filamentation instability has also been observed at the onset of wakefield in electron acceleration experiments as the particle beams interacts with background plasmas. Nevertheless, theoretical and numerical work is still necessary to identify the condition for the onset of the instability due to ultra-relativistic fireball bunches in plasmas.

Using ab initio PIC simulations, the interaction of an quasi-neutral beam with a plasma is investigated using 20 GeV electron and positron bunches available at the Stanford Linear Accelerator Center. Figure 1 shows the beam density, the transverse magnetic field and the longitudinal electric fields after 4 cm beams propagation in a static plasma in cases where they do not completely overlap, but they are separated by an offset. When the beam is perfectly neutral, it generates filaments and transverse magnetic fields. The initial kinetic energy of the beam converts into the magnetic field energy. However, when the beams are spatially separated, they drive a strong longitudinal electric field and the magnetic filaments start to fed. 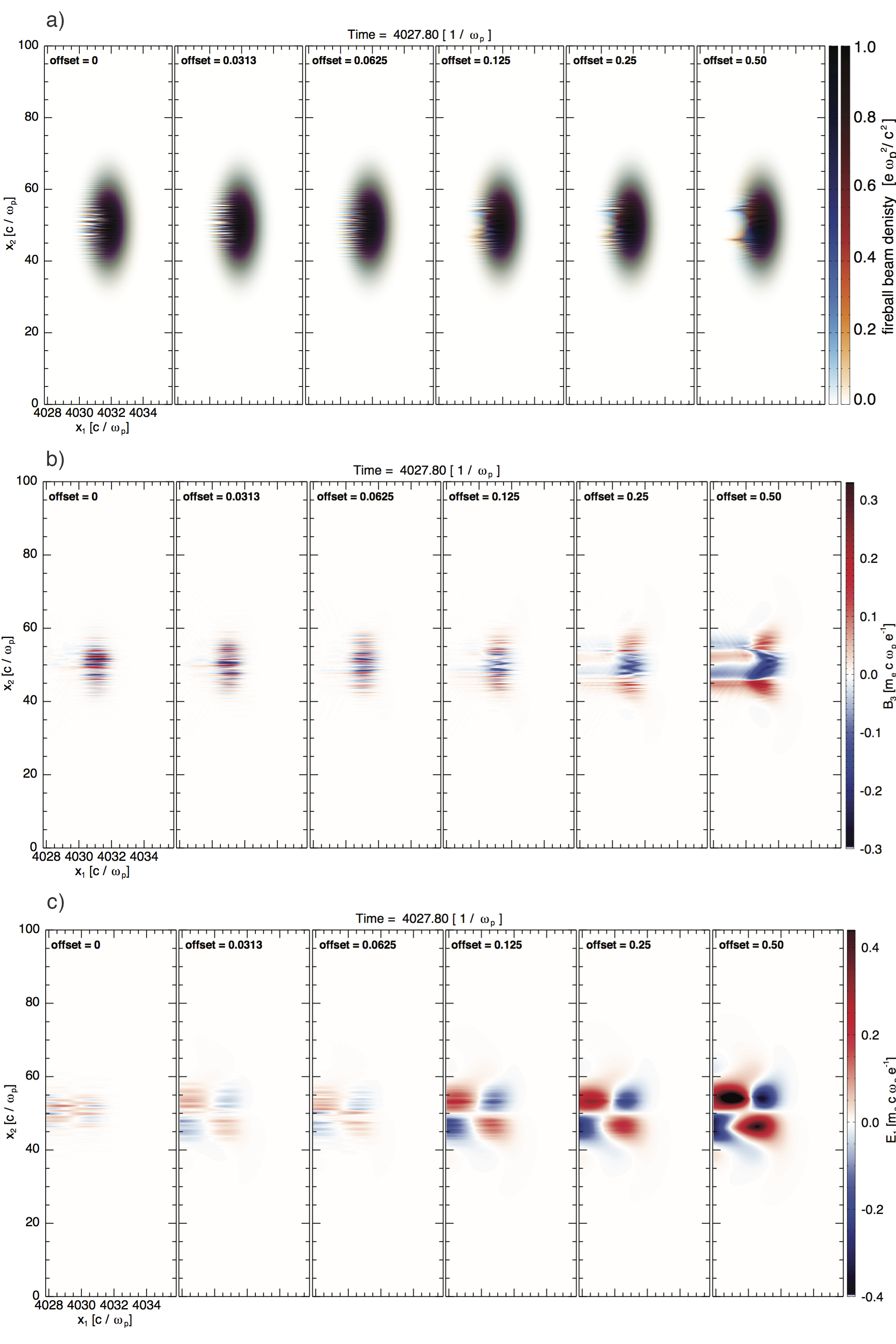 Fig.1 Two dimensional simulations of a fireball beam propagating in a plasma. In (a) we show fireball beam filaments in blue (orange) for electron (positrons). In (b) we show the transverse magnetic field in the direction outside the simulation plane. In (c) we illustrate the corresponding longitudinal electric field. 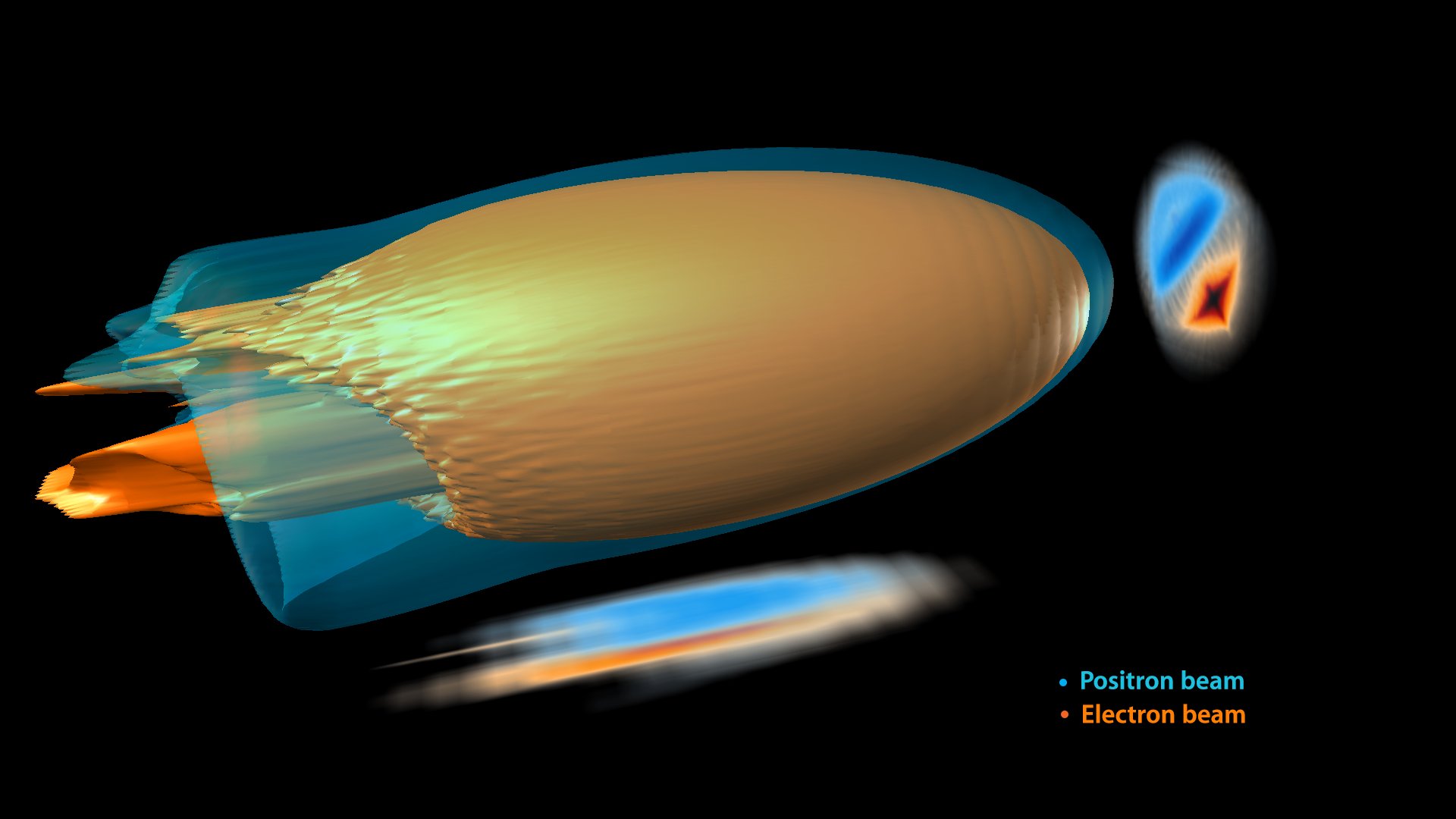 Figure 2 shows charge density isosurfaces of electron (blue) and positron (orange) obtained from a 3D simulation, where the electron and positron beams are separated by c/w_pe. By looking at the projection, it is clear that the region, where electrons and positron overlap perfectly shows a filamentary structure, but as the beams propagate and charge separation becomes relevant, wake-fields effects start to appear with electrons blowed out and positrons sucked in.

Share:
Disruption effect
Does light fly straight? In an optical tornado, it spins.