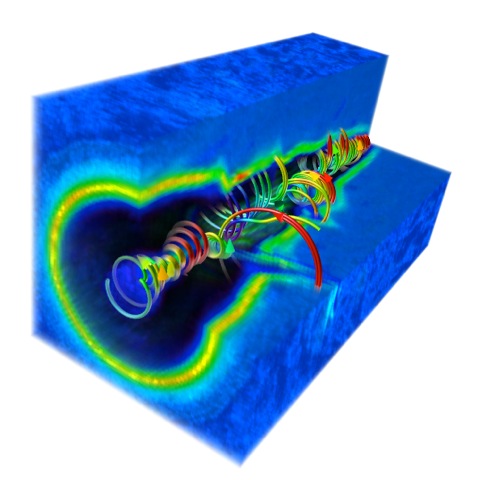 A low-intensity laser can propagate through an underdense plasma weakly interacting with it. In other words, the plasma is transparent for the laser – the energy of the laser does not dissipate much into the medium. But, if the laser is very intense, it has a strong interaction even with underdense plasma. If we would like a strong laser to propagate in a stable manner through a long plasma slab without significant losses, a guiding structure is needed. This structure can be a plasma channel – a lower density tunnel with a specific density shape such that a laser is prevented from defocusing.

This is relevant for fast ignition, because the ignition laser should be transported to the core of the target, minimising the losses to the interaction with pre-plasma.

A long low-intensity laser directed through a plasma can “drill” this type of channel. The electrons are expelled sideways, and if the laser is long enough, the plasma ions are moving as well. This produces a peculiar field structure that governs the motion of any particles left in the mostly void channel structure.
The channel from the picture still has the laser pulse in its entire length. There are some electrons left in the channel axes, and they are pushed forward forming a current.
This produces azimuthal magnetic field whose field lines are shown in the picture. The channel here would make a good guiding structure.