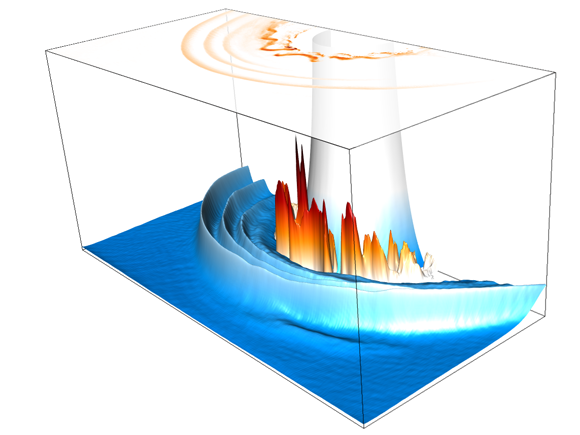 Solar wind is the name commonly associated with the stream of hot ionized gas, composed of free electrons and protons, released from the sun’s atmosphere. After its emission, the solar wind propagates in interplanetary space and interacts with several objects in our solar system, namely multi-scale magnetic fields. The interaction between the solar wind and earth’s magnetic field is responsible for the formation of our magnetosphere, which deflects the plasma around our planet. Earth’s magnetosphere prevents the solar wind from reaching earth’s atmosphere, protecting us from hazardous space radiation. Therefore, the detailed study of this interaction is relevant to understand space weather phenomena, which impact, for example, satellites operation.

In general, the typical scales of planetary magnetic fields are much bigger than the kinetic scales associated with the solar wind plasma, and this interaction is considerably well described using macroscopic frameworks like magnetohydrodynamics (MHD). However, when the magnetized object is small, on the order of the plasma’s kinetic scales, the macroscopic description of MHD breaks down and kinetic effects must be taken into account. In order to study these miniature scenarios, we resort to particle-in-cell simulations that accurate capture the kinetic-scale details of the interaction. Examples of small-scale magnetic field structures are, for instance, small-scale magnetic anomalies on the lunar surface, or artificial minimagnetosphere-shielding concepts that are being envisioned to be used for interplanetary travel.

Similarly to what happens in planetary-size magnetospheres, the plasma is reflected and deflected when it interacts with the minimagnetospheres. In the miniature magnetospheres though, small variations in the solar wind velocity and magnetisation dictate much different dynamics of the interaction. Given that the typical scale of the minimagnetospheres is on the order of some ion Larmor radii, if the plasma travels faster than the speed of information travel in such magnetised media (magnetosonic speed), then a shockwave is generated upon reflection on the magnetic field. The variations of the effective size of the minimagnetosphere, combined with the different shock regimes associated with different conditions of solar wind flow velocity and magnetization, makes this system extremely rich and complex from a fundamental perspective.

In the figure, we represent a laminar shockwave’s magnetic field (oriented in the vertical direction) in blue tones and the electron fluid velocity component perpendicular to the magnetic field in orange/red tones. In the back of the simulation box, we represent in white/blue the miniature scale magnetic field obstacle. The plot shown on the top of the box is the projection of the electrons fluid velocity and evidences the modulation due to counter streaming plasma micro-instabilities in this region. In this parameter regime, the shock is laminar and a train of solitary (tsunami-like) magnetosonic waves is generated.