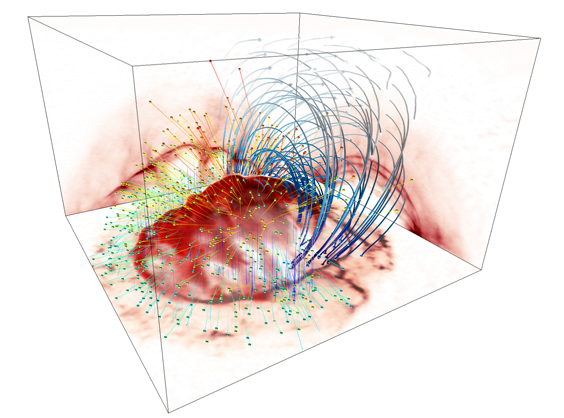 This image illustrates the collision of the solar wind plasma (flowing from top to bottom) with a localised crustal magnetic field structure (represented by the blue field lines). A symmetric magnetic field structure is present in the left hand side of the box, but has been omitted in this figure for sake of clarity. The red cloud represents the space-charge electric field at the magnetopause, which is set up by the different penetration between ions and electrons at the edge of the magnetosphere. The lateral-projections of the electric field structure reveal interesting kinetic features: the projection on the left shows a rippled surface structure, due to the diamagnetic electron-ion drift instability which occurs perpendicular to the magnetic field lines; in contrast, the projection on the right shows a smooth surface structure since the relative electron-ion drift is absent. The electric field cloud is responsible for shielding the lunar surface from the solar wind protons (represented by the scattered spheres). The bottom projection shows the proton flux at the lunar surface. Sharp regions of enhanced proton-flux (on the order of c/\omega_p) are observed surrounding the magnetic anomaly, leading to enhanced solar wind weathering and the formation of lunar swirls.