Modeling Earth's magnetosphere in the laboratory in Physics of Plasma 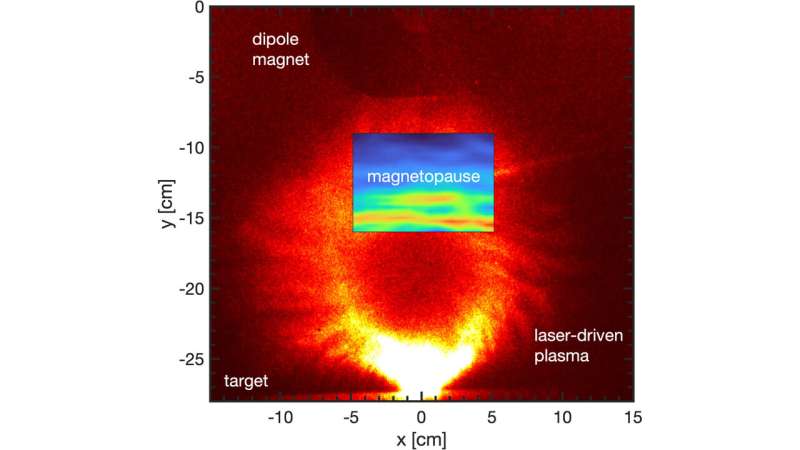 In Physics of Plasmas, a collaboration of scientists from Princeton, UCLA, and Instituto Superior Técnico, reports a method to study smaller magnetospheres, sometimes just millimeters thick, in the laboratory.

A magnetized object, such as our planet Earth, is immersed within a stream of ionized gas, called plasma. The region around the object in which this effect is seen is called a magnetosphere.
The Earth’s large magnetosphere that extends out into space, has also the fundamental role of blocking lethal cosmic rays and particles from the sun and stars and allowing life itself to exist.

These mini-magnetospheres have been observed around comets and near-certain regions of the moon and have been suggested to propel spacecraft. They are good testbeds for studying larger planet-sized magnetospheres.

Previous laboratory experiments have been carried out utilizing plasma wind tunnels or high-energy lasers to create mini-magnetospheres. However, these earlier experiments were limited to 1D measurements of magnetic fields that do not capture the full 3D behavior scientists need to understand.

“To overcome these limitations, we have developed a new experimental platform to study mini-magnetospheres on the Large Plasma Device (LAPD) at UCLA,” said author Derek Schaeffer.

This platform combines the magnetic field of the LAPD with a fast laser-driven plasma and a current-driven dipole magnet.