Plasma instabilities are strong candidates for seed magnetic field generation and to explain radiation processes associated with Gamma Ray Bursters. Intense efforts have been devoted to explore possible mechanisms for the amplification of seed magnetic fields in plasmas. Since astrophysical measurements are currently limited, it is both interesting and important to investigate novel configurations to probing these mechanisms in the laboratory. It has been recently proposed that the interaction of relativistic fireball (electron+positron) bunches at Standford Linear Accelerator (SLAC) could be used in experiments to explain magnetic field amplification in astrophysical scenarios through the current filamentation instability. Fireball beam plasma interaction experiments are then crucial to understand the conditions enabling the growth of the relevant plasma instabilities, amplification of ambient magnetic fields, and shock formation in relativistic fireballs.

Ab initio plasma PIC simulations in astrophysical conditions have provided new directions to understand these questions, identifying the role of plasma instabilities in the shock formation, in the particle acceleration processes, and in the generation of magnetic field structures compatible with the generation of intense radiation bursts by synchrotron radiation processes. In our present work, we extended the research in considering beams with different profiles, lengths, transverse sizes, charges and energies. Specifically, we performed a series of 2D numerical studies of fireball beams shorter and much longer than the plasma wavelength using OSIRIS. Figure 1(a) represents the propagation of the SLAC beam in a pre-formed electron – proton plasma where the dynamics of the background plasma ions is ignored. It is found that when the shorter beams interact with the plasma, it generates return current and hence leads to Current filamentation instability – Figure 1(b). The filament grows to thickness above 5 µm ≈ 0.5 c/wpe. This instability saturates after 10 cm considering a plasma with density n~1017 cm-3. The instability generates strong magnetic fields order of MGauss. The effect of beam temperature also has been studied. The growth of current filament instability is being suppressed by increasing the perpendicular temperature. 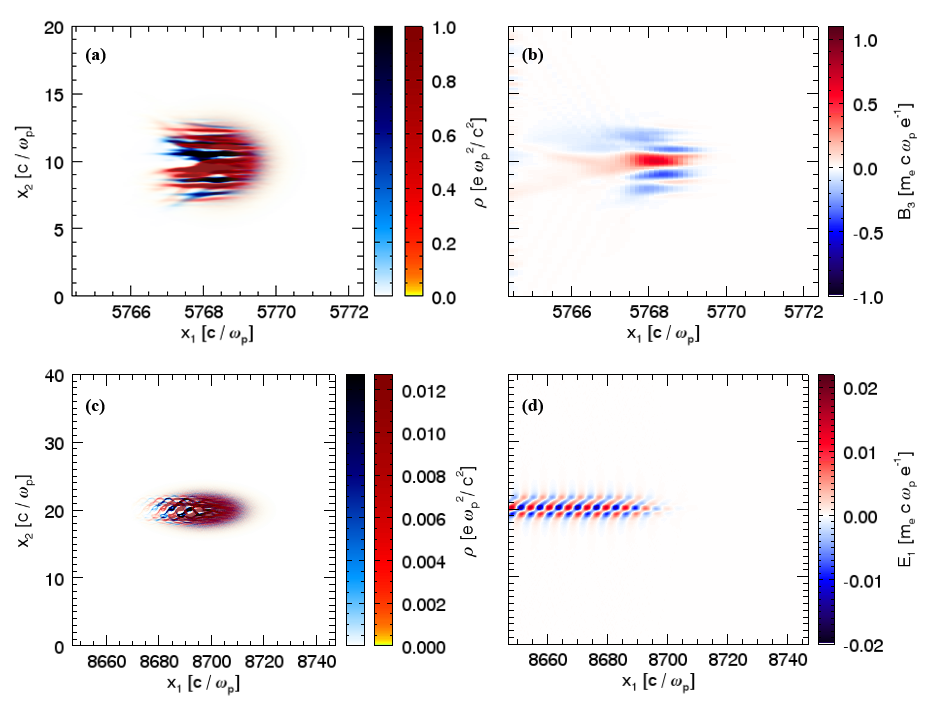 Simulations considering bunches much longer than the plasma wavelength showed that by keeping the number of bunch particles constant, oblique instabilities grow faster than WI/CFI due to the coupling of longitudinal and transverse mode, which reduces the growth of WI/CFI shown in Figure 1(c). The instability generates intense longitudinal electric field order of GV/m and drive plasma wake field as illustrated in Figure 1(d). The beam propagates much deeper inside the plasma and saturation occurs only after 30 cm.