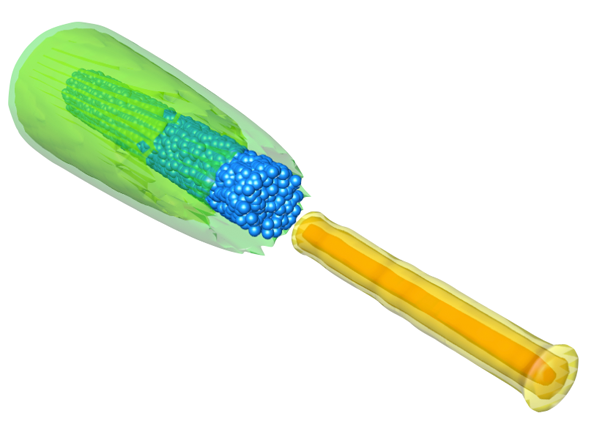 Plasma wakefield accelerators can sustain higher accelerator gradients than conventional accelerators, exceeding 100GV/m. In order to reach the highest acceleration gradients the typical configuration used consists of an intense and short electron or laser drive beam that propagates in a plasma in the so-called non linear blowout regime where they excite relativistic plasma wake fields. In this blowout regime the plasma electrons are expelled radially from the beam axis while the remaining and immobile background plasma ions form a positively charged bubble that attracts the electrons back to beam axis, leading to both electron acceleration and focusing. However, the focusing fields generated in such configuration are too narrow to enable efficient positron acceleration and given the relevance of positron acceleration for future plasma based linear colliders, alternative acceleration techniques have been proposed and explored. In particular, the use of hollow channels for positron acceleration in linear regimes has been shown to allow great control over the focusing electromagnetic fields that act upon the positrons. Nevertheless, efficient methods of achieving such hollow channels are still being developed.

In this context, we have been investigating a novel positron driven plasma wakefield acceleration setup that runs in a highly non linear regime. The configuration that we explored consisted of a tightly focused positron bunch (represented by the yellow-orange-red colored surfaces in the picture) propagating in a highly under-dense plasma so that the background plasma ions motion is significant. In fact, ions are radially expelled generating an on axis plasma hollow channel (represented by the green surfaces in the picture). The electron-ion plasma motion leads to the formation of wakefields responsible for the longitudinal acceleration of positrons and the lower charge density within the hollow channel accounts for nearly negligible and focusing transverse wakefields.

3D PIC-code OSIRIS simulations showed that self-driven hollow channel formation can occur in the plasma wakefield acceleration driven by tightly focused positron beams as long as the beam is tightly focused into a high density narrow but long beam and the background plasma ions (preferably hydrogen ions) density is low. The numerical results showed the acceleration and focusing of a test-particle positron bunch (represented by the blue spheres) in the hollow channel.